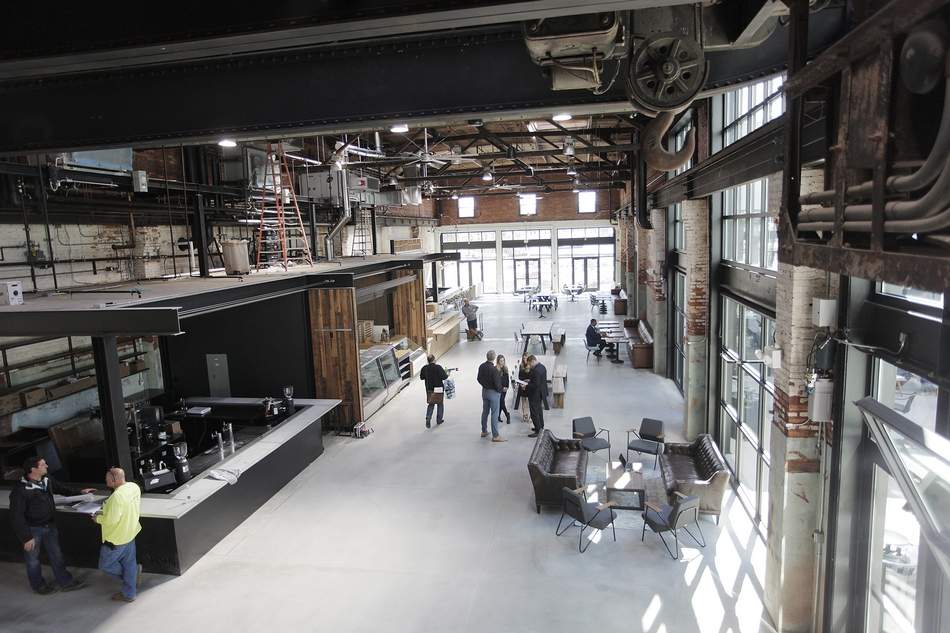 TAMPA — It’s not unusual lately to see people stroll off the Riverwalk and tug on the doors at the Heights Public Market, the nearly finished dining and commercial emporium inside the old Tampa Armature Works building.

Those doors are expected to open soon — think weeks, not months — after a $20 million job to transform a century-old warehouse into a mixed-use space that retains a lot of its industrial character.

“We tried to leave as much natural and unpolished as we could,” said Chas Bruck, who developed the Heights Public Market with Adam Harden, his business partner from the Tampa private equity firm SoHo Capital.

The public market is inside what used to be a 22,000-square-foot maintenance bay for Tampa Electric trolley cars. The walls got pressure-washed and sealed, but, yes, that’s original paint. Workers uncovered and restored five brick fireplaces. A walk-in safe with a heavy steel door will store bottles of wine. A crane mounted near the ceiling still holds a chunky iron lifting hook, cleaned up but intact, nearly 30 feet above the Ichicoro Imoto ramen noodle counter.

Still, it is an ambitious transformation since the 1980s when Harden, then a young Tampa shipyard worker, first saw the Armature Works. That was on a trip to deliver a generator to the electric motor machine shop that moved in after TECO moved its streetcars out. By the time he and Bruck began working on the project more than three decades later, the property was mired in bankruptcy.

“We knew the building could be something special,” Harden said, especially given its spot overlooking a sweeping bend in the Hillsborough River, just north of Ulele and Water Works Park. “We just didn’t know what.”

So they’ve made space for a little bit of everything. In the market, more than a dozen local vendors will serve up everything from coffee to coal-fired pizza to cocktails to cold-pressed juice, and from burritos to butcher-carved cuts of meat to breakfast all day. Plus ice cream.

Along with the places to get something to eat, there will be a small store offering locally made products and a demonstration kitchen with space for 30. One of the meeting spaces is a former upstairs theater with views of Tampa’s skyline and the river.

This summer, Harden and Bruck plan to open a rooftop bar at the Armature Works. The building also will be home to a Southern-inspired restaurant and chophouse, Steelbach, and a co-working space with more than two dozen offices, plus meeting space, available on a subscription basis.

And the Armature Works renovation is one piece of a larger plan that Harden and Bruck have put together for the 43 acres known as The Heights. The Pearl, a 314-apartment complex with ground-floor retail, is almost finished, but more projects are planned.

In coming months, Harden and Bruck plan to start construction on two more projects at the Heights. One will be a $41 million office building with 150,000 square feet of space on six floors. It’s expected to be done in July 2019.

The other will be a boutique hotel — number of rooms, cost, hotel operator and other details to be announced.

Eventually, a 195-foot-tall water tower salvaged from Bartow will go up outside the building as yet one more bit of steampunk branding.

“A lot of people are very inspired about what this project is going to do for our city,” said Blake Casper, who, as the creator of the Oxford Exchange, knows something about adaptive reuse projects.

For Harden, it was heartening to see the drawing power the property had, even with the doors closed and piles of dirt out front, during the recent Indie Flea Market, which he said drew about 7,000 people.

Watching vendors run out of food in a just a few hours, Harden said, “it made you feel that maybe we’re onto something.”