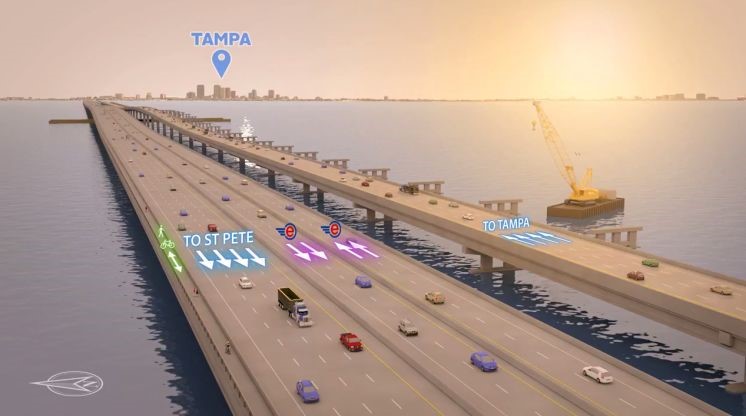 The Florida Department of Transportation announced Monday that it now plans to build an eight-lane bridge, complete with a bike and pedestrian trail, to replace the northbound span of the Howard Frankland. That part of the bridge, built in 1960, is old and needs to be replaced.

This massive structure will have four lanes of traffic going south, to St. Petersburg. It will also have four express toll lanes, with two lanes traveling in each direction. Only drivers who pay a toll, which will fluctuate based on demand, can use those lanes.

Those toll lanes will also be available to buses and even self-driving vehicles, whenever that technology arrives in the future. And two of those toll lanes could also be converted for use by a light rail system. 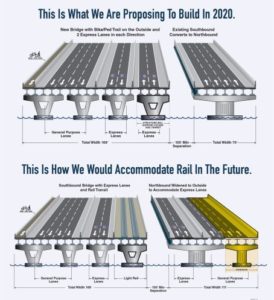 The new Howard Frankland plan is the latest in a series of moves by state transportation officials to address local concerns and rebuild relationships with Tampa Bay political leaders and residents.

Much of that friction was created by the rollout of Tampa Bay Express, a controversial plan to add 90 miles of toll lanes to bay area interstates. In December, state officials hit the pause button on TBX. Then in May the state rolled out the similar but more flexible Tampa Bay Next initiative. Gwynn took over as DOT’s secretary for the Tampa Bay region in June.

The result, according to local leaders and transportation planners, has been a more open process with state leaders who were willing to listen to suggestions rather than say “no” immediately.

“It’s a breath of fresh air, (for DOT) to be more transparent, more clear,” said Whit Blanton, executive director of the Pinellas County transportation planning agency, Forward Pinellas. “Yes, they’re still saying there are going to be some things they won’t be able to do. But they’re being a lot more clear about how those decisions are made.”

The bridge announcement comes just days after a regional transit study selected light rail from Wesley Chapel to Tampa across the bay to St. Petersburg as the highest-ranking transit option with the most likelihood of being built in the near future.

The new bridge, estimated to cost $750 million, leaves room for just such a system.

This is the latest iteration in a string of changing plans for Tampa Bay’s most traveled bridge.

A year ago, the state’s plan was to put the toll on an existing lane, leaving those unwilling to pay with only three lanes of traffic on the often-congested bridge. The state scrapped that idea after facing intense backlash from community members and elected officials for taking away a free lane.

In January, officials came back with a different option: build a six-lane bridge, with one toll lane in each direction, costing an estimated $630 million.

But people had concerns with that, too: what happens if there’s a crash in the toll lane and emergency vehicles can’t get through? Where would any future light rail tracks go? Would buses in the single toll lane slow down traffic?

The latest Howard Frankland plan, local leaders said, shows the state is starting to listen to them. For instance, the latest bridge proposal includes a bike and pedestrian path — something the counties’ transportation groups had asked repeatedly for but to no avail.

Construction is expected to start in 2020 and last four years, Gwynn said. Officials believe the project will have a minimal impact on traffic, as both spans will remain open while the new segment is built.

Once the new bridge is constructed, traffic will flip on the current southbound span, built in 1990. That segment will become the new northbound bridge, for those driving to Tampa.

The old 1960s bridge will then be demolished.

The new eight-lane, bike and pedestrian-friendly bridge is projected to cost $120 million more than the six-lane version. However, that old Howard Frankland plan required building a third bridge to accommodate light rail, if regional leaders and voters ever decide to build such a system connecting Pinellas and Hillsborough counties. That third bridge would have cost at least $375 million, DOT spokeswoman Kris Carson said.

The third bridge won’t be necessary under the updated plan, Carson said. Instead, two of the express lanes on the eight-lane bridge could be used to accommodate light rail.

The 1990s bridge — which, at that point, would be the northbound bridge to Tampa — would need to be expanded to replace the two toll lanes on the new bridge that would be dedicated to light rail. Such an expansion would cost $190 million in today’s dollars, Carson said, bringing the total for the new bridge and light rail accommodations to just under $1 billion.

Gwynn said the motivation behind the latest Howard Frankland vision is to ensure the new structure, which will be around for about 75 years, is best equipped to accommodate more people moving to the area, developments in driverless cars and any transit projects that might take shape.

“I’ve tasked the staff to take off any preconceived notions about, ‘This is how things have to be done, because this is how we’ve always done it,’ ” Gwynn said. “Look at the full gamut of opportunities and let’s see where that takes us.”

Have questions or concerns about the state’s new plan for the Howard Frankland? DOT will hold two public hearings.

TBX: For most of 2016, the state’s Tampa Bay Express plan called for one of the four free lanes on the new Howard Frankland span to be replaced with a toll lane in each direction.

The Reset: Officials reversed course in October 2016 and said they would not take away a free lane.

Six Lanes: In January 2017, DOT said the new plan was to build a six-lane bridge, with four free lanes going north to Tampa and two additional toll lanes, one traveling in each direction.

Eight Lanes: The state’s current plan is to build an eight-lane bridge: four regular lanes and four toll lanes, two going each direction. There will also be a bike and pedestrian path. The new plan leaves room for autonomous vehicle technology and even light rail.