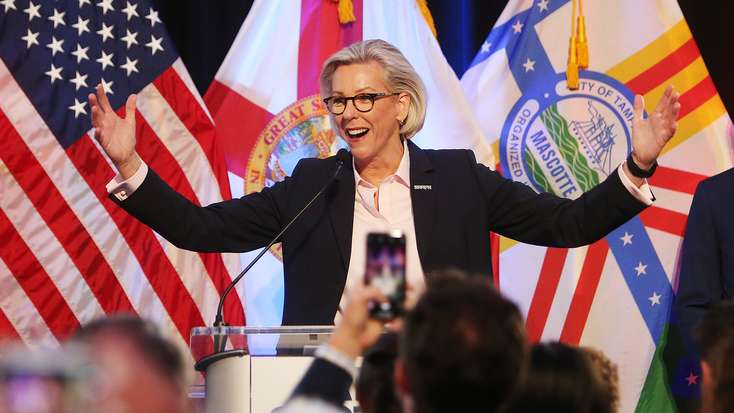 Jane Castor is Tampa’s next mayor, making history as the first openly gay mayor to gain office in Tampa Bay.

The retired police chief crushed opponent David Straz with 73 percent of the vote, stretching a near-win in the primary seven weeks ago into a full-on rout Tuesday night.

It was over before the first ballot cast on Election Day got counted. Castor, 59, ran up an overwhelming lead in early voting, ending any hope for Straz despite his record spending on the race.

Campaign finance reports show the retired banker spent nearly $5-million during the campaign, much of it from his personal fortune. That means Straz spent nearly $345 for every vote he received. Castor, who won all but 7 of the city’s 103 precincts, spent about $44 per vote.

“The next mayor of Tampa!” she said to a roar at The Vault.

Her speech was mostly thank you’s to her supporters, including outgoing Mayor Bob Buckhorn and political consultant Ana Cruz, Castor’s partner, whom she dubbed “invincible.”

Castor said it was important to note her campaign stayed positive.

“No matter what we went through, no matter what obstacle was put in our way, we never lost our focus on the issues that mattered,” she said.

Those issues, she said, were strengthening neighborhoods, including boosting transit options and beefing up affordable housing stock in a rapidly gentrifying city.

She closed by noting that her election sent a “resounding message,” and asked Tampa to rally behind her as she readies the city for historic change.

Shortly after, Straz agreed it was time for the city to rally behind its next mayor.

“If you want the best for Tampa, you want Jane Castor to succeed as mayor,” he said.

The seven-week runoff campaign was largely conducted through television ads, mailers and social media rather than face-to-face debates. Straz, 76, declined most debates and forums, saying voters were tired of them.

Instead, he spent millions to flood residents with a series of negative ads attacking Castor’s 31-year career with the Tampa Police Department, capped by her tenure as chief between 2009-2015.

He also portrayed City Hall as a nest of corruption ruled by insiders on the take. He provided almost no evidence of either charge.

Castor largely ignored her opponent after nearly winning the race outright in the primary with 48 percent of the vote, almost triple Straz’s 15.5 percent. She received endorsements from Buckhorn and the three returning city council members as well as most of the city’s business and political establishment.

Her message was largely based on her track record as chief and a promise she will keep Tampa on the overall trajectory launched by Buckhorn.

Many voters responded to that approach Tuesday, saying they trusted her vision and leadership.

“She ran a positive campaign,” said Burns Jones, 58, after casting his ballot for Castor at the Tampa Garden Club on Bayshore Boulevard. Jones said he was turned off by the negative tone of Straz’s campaign.

Charles McDonald, 66, said he picked Castor partly because he saw her shopping in East Tampa neighborhood stores with her sons.

“I want the city to progress in the right direction,” McDonald said after he voted for her at the Mount Zion Missionary Baptist Church in East Tampa.

Straz focused his efforts on the city’s poorer neighborhoods, especially the city’s African-American communities. He said those neighborhoods had been neglected by insiders at City Hall, a group his campaign alternately called a “good old boys network” or a “cabal.”

He also promised to end the city’s red light camera program, which polls have shown to be unpopular with residents.

In the end, Straz won five heavily African-American precincts, but that was about it.

Several people who voted for Straz on Tuesday said they liked his stances and his status as an outsider.

“Honestly, I think the red light cameras are just a revenue enhancer,” said Bubba Ellis, 64, outside the Sons of Italy Lodge in West Tampa. He said he liked Straz’s business experience and the fact he had never served in government.

At the Temple Terrace United Methodist Church, Terrence Holton, 48, said his vote for Straz was “payback” for Castor’s policy while police chief of disproportionately ticketing black bicyclists in an effort to reduce crime.

Although Straz and Castor only met for two televised debates and a forum in West Tampa, their respective spending wiped out all previous records for local races in Tampa Bay.

Campaign financial filings show Straz raised $5.1 million while Castor raised about $2 million, much of it through an affiliated political committee that netted donations from many Tampa corporations, law firms and at least $200,00 from Tampa Bay Lightning owner Jeff Vinik.

Vinik was a frequent target for Straz, who called for an investigation of his influence at City Hall in February before backing off. In recent weeks, Straz’ television ads have linked Vinik to the “good old boy network” without directly identifying him. Vinik has endorsed Castor.

Castor’s win has been embraced by LGBTQ activists, including Equality Florida, which spent money and organized volunteers on her behalf. The city’s police and fire unions were also strong supporters.