What’s the state of St. Petersburg’s economy? Despite some hurdles, it’s hard not to celebrate the boom 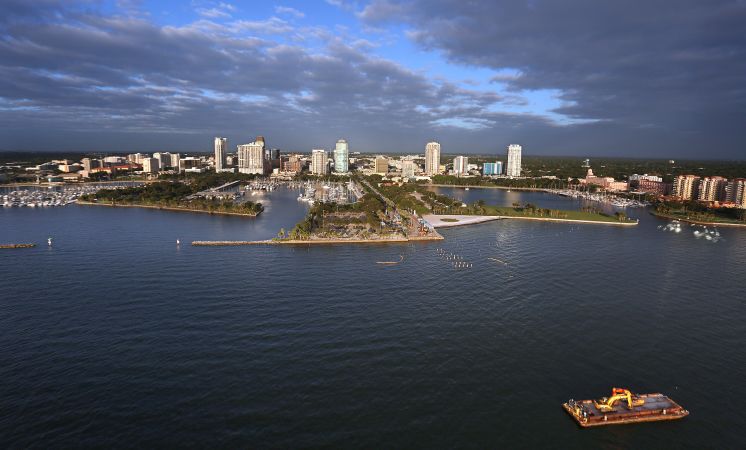 Everyone should take a moment to appreciate the stunning transformation of St. Petersburg from its former nickname as “God’s Waiting Room” to a city whose abundance of economic development opportunities under way nearly defies the ability of its leaders to capture them all.

The city’s second annual “state of the city economy” gathering at USF St. Petersburg attracted nearly 200 to hear top city officials celebrate a town bursting with new construction of residential condos and apartments, new and compelling museums, a pier and renewed waterfront in the making, lower unemployment closing in on 4 percent and even lower poverty this year over last, among a host of thumbs-up economic indicators.

No city bats 1,000. St. Petersburg Mayor Rick Kriseman was quick to get out in front of a few nagging issues that continue to mar the city’s can-do atmosphere. He said some people have called for a moratorium on residential construction until fixes can be made to the city’s overwhelmed sewer system, one that spilled more than 200 million gallons of wastewater into Tampa Bay the last two summers. Kriseman dismissed any delay to construction arguing that the real issue was better managing surface water during the stormy season.

He also said the proposed new pier will be built despite some calls to divert dedicated pier funds to more needy issues. Not building the pier at this point of the process would cost the city $35 million, the mayor said. And that’s just not going to happen.

One other red flag arose. A survey of small businesses gave good marks to the city except in one category: Only 71 percent of those surveyed said they were satisfied with the quality of city services. Officials, in response, say they have work to do to improve that number.

Still, Tuesday’s overall event was celebratory — almost giddy — at times given the riches of bullish economic news to highlight in a presentation topping 90 minutes.

Here are my top 10 “good news” takeaways from the event:

2. Look for more retailers to appear downtown as the city starts pressing for a greater mix of shopping options.

3. The “long stalled” redevelopment of the 86-acre Tropicana Field represents “the most exciting opportunity for St. Petersburg in generations,” Kriseman said.

5. The “innovation district” is just getting off the ground but already is anchored by, among other things, a soon-to-open, 230,000 square foot Johns Hopkins All Children’s Hospital research facility.

6. In a city already known for museums, two new ones — the Museum of the American Arts and Crafts Movement and the James Museum of Western & Wildlife Art — are in the works and will be open in the next year or two.

7. It’s not just happening downtown. Specific economic progress was cited elsewhere with city gains and redevelopment cited on the south side, the Skyway Marina District, the Tyrone area, the Edge District and Gateway areas.

8. The creation of St. Petersburg’s own Economic Development Corp., expressly aimed at recruiting more and better-paying jobs, will put the city on a more competitive footing with Tampa with its well established EDC.

10. Tourism snapshot: In Pinellas, hotel, condo and camping occupancy rates are up 16 percent since 2010 to 77.2 percent in 2015. The average room rate is $138.26. The Firestone Grand Prix race, held downtown each March, is one of the city’s big money makers. A five-year deal was renewed last year.

Other gains were also cited. But you get the idea. Combined, the economic development news for St. Petersburg is brisk at the very least. As long as infrastructure stumbles are handled responsibly, the city looks well positioned for years of diversified growth.

Two issues were not discussed. Officially, St. Petersburg still says it expects to keep the Tampa Bay Rays in a new stadium that would be built on the northeast corner of the Tropicana Field property. I hear that but I’m far from sure I sense that will happen.

And then there is the matter of managing all this downtown growth happening before our eyes.

If indeed 10,000 new housing units will hit the market in the next two years, let’s hope the city is anticipating the demands so many more people — and their cars — will place on what is still a small town community.

At last year’s state of the economy, Kriseman described St. Petersburg as “cookin'” with the right mix of economic ingredients.

Both are apt descriptions, as long as we don’t scorch the city along the way.