Sparkman Wharf opens in Tampa to massive crowds: Here’s what it’s like 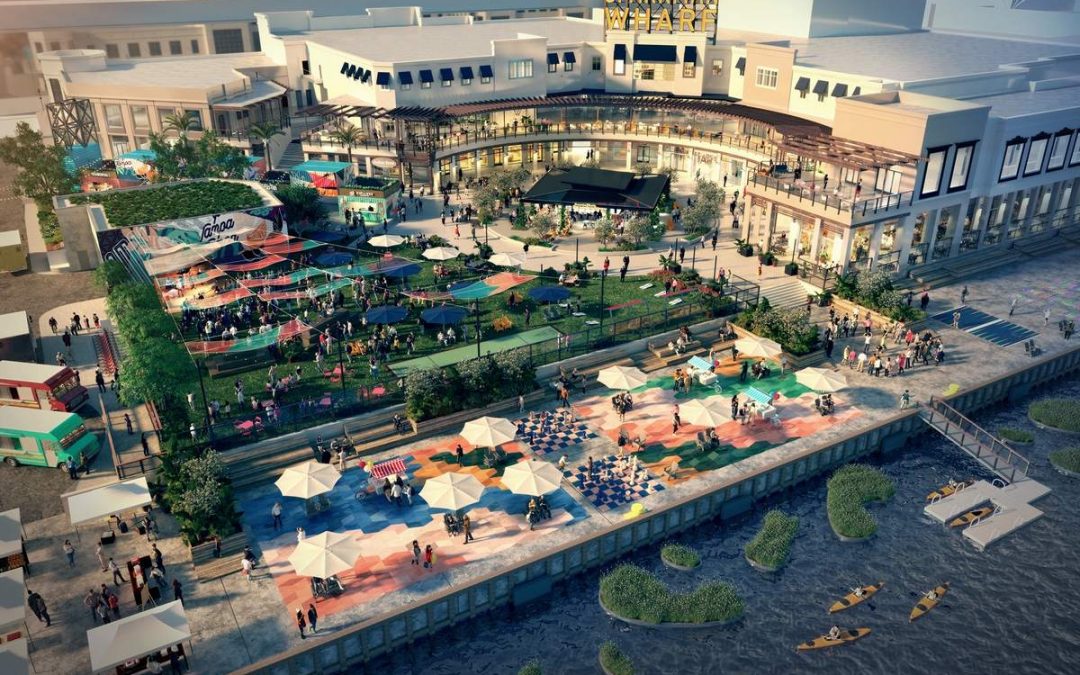 Wi-Fi data shows there were more than 13,000 cellphones (ostensibly clutched by that many humans) wandering the grounds of Sparkman Wharf, the outdoor food court that anchors the $3 billion Water Street development from Strategic Property Partners (Jeff Vinik’s multi-use project on the waterfront). It opened on Nov. 30 after a fairly substantive delay.

Gallito Taqueria sold out of 4,000 tortillas that day, a line looping around the side of the building. By Sunday, BT in a Box was down to just the banh mi sandwiches and BT Nguyen’s famous chicken and cabbage salad. Chef Branden Lenz stooped, ramming dozens of baking pans with puffy dough at the Detroit-style Corners Pizza, while Marty Blitz ladled pulled pork and avocado crema over tostones, sweat making his tattoo sleeve glisten.

Clearly, hopes were not high enough. I slunk around on that first Sunday and watched 300 dogs on leashes eyeballing each other and hoping for floor pizza. I went back Wednesday before the lunch business geared up and talked to many of the restaurateurs, each of them with the unique shell-shocked glaze of new restauranthood.

It’s too early for a proper review, but readers want to know: Is it good? Is it expensive? Can I bring my dog? My kids? And what is it exactly? The answer to the first four questions is yes. There’s great food and drink, it will cost you a bit more than you might expect, and yes, your dogs and kids are welcome to come and cavort on the wide AstroTurf lawn, provided they utilize the relief area appropriately.

What is it is a trickier question. Let’s take a walk around.

You perambulate past the dark husk of old Channelside (inside it will be reimagined as a mixed-use retail center and some other buzzy things), take a left at Hooters (it’s out of there in January, by the way, after a 15-year run). Cranes grid the sky above like haphazard graph paper; beer trucks line up to replenish the vendors, each of which is housed in a brightly painted metal container topped with a wood-slatted sign space individually interpreted.

At each of these spots, you walk up to the counter and order, then wait for your food and find a place to eat. Between each vendor is a pass-through to the other side, shaded areas that will be premium seating in hot months.

The first space on the left is Flock and Stock, a burgers, chicken sandwiches and fries concept from restaurateur Dave Burton (Heights Melts and Heights Fish Camp, both in the Hall on Franklin). Its logo is a chicken sitting cavalierly on a cow’s back. Items start at $7.99, with choices of buns, meat and accompaniments, and there’s a Southern inflection here. A number of menu items were blanked out with paper and tape at this point — a common theme with the Sparkman vendors as they get up to speed.

Want more stories like this? Sign up for our Cooking Newsletter
Get cooking inspiration, recipes and other food trends and tips delivered to your inbox every week.

Next is Boat Run Oyster Company, something I’d heard little about until I had the opportunity to sit down with dynamic owners Ryan Conigliaro and Scott Roberts, childhood friends from Land O’Lakes and avid spearfishers and oyster aquaculture farmers in Cedar Key. For now they are bringing in oysters from major growing parts of the country: Pick a varietal, choose a pairing (you can get ’em chargrilled with something like citrus sriracha butter or raw with pickled nori, scallion and sesame seeds), $13 for six, $25 for 12. There’s also a mighty fine shrimp roll (lobster roll-style with local white shrimp, $12.50) and items not yet in place like a ceviche of the day.

The end unit on the left side is the Corners Pizza from the folks behind ramen restaurant Ichicoro, a departure for them and a different style than we’ve seen in Tampa Bay: square, crispy edge with an airy, puffed crust, cheese on the bottom and then the sauce, a slice that travels well and holds up if you wait five minutes to eat it.

Now look straight ahead to the huge Fermented Reality Biergarten, a 3,000-square-foot covered but open-sided bar, ringed by high-tops, low metal tables and funky Adirondack chairs. (The cool thing about Sparkman is all the different mix-and-match seating options, many of them movable into your own customized arrangement. They’ve got beanbag chairs, even.) Owner Joel Bigham was there Wednesday before lunch, trying to make sense of his beer list, divided into categories like Belgian, Hoppy, Light and Bright. The big sellers so far? Light lagers.

On the other side of the project, the first kiosk is Foundation Coffee, which started in Riverview with a second location in Tampa Heights. Look for a seriously punchy but nuanced cold brew ($4) and latte art ($4.50) you are so going to take a picture of. Opposite that is Edison’s Swigamajig, Jeannie Pierola’s large container turned somewhat askew, an interesting mix of craft cocktails, just-slightly-tiki, and a short list of seafood dishes. So far, an excellent fish and chips with good red snapper ($14) and grilled jumbo shrimp on little avocado toasts ($12; is this millennial catnip?).

Pierola’s prices seem a little steep for something you eat out of a cardboard box (another cool thing: most of the vendors use wooden recyclable silverware and paper straws, no plastic), but they are commensurate with those at the next kiosk, Montados by Mise en Place, a Spanish tapas and wine bar. The pan con tomate ($6) is a neat Cuba-meets-Barcelona mashup (grated tomatoes and a swirl of olive oil on toasted La Segunda bread), and the tostones ($8) brought an interesting multicultural concoction of twice-fried plantains topped with lechon asado, avocado crema and a Peruvian pepper sauce. (Also, great Begonia sangria in a can; $9.)

After that is another pass-through space, then BT in a Box in a lavender container. BT Nguyen is sticking to her wheelhouse with this one, not exploring a new cuisine like some of the other operators. I had a classic banh mi with plush pork terrine and a big, crunchy tangle of pickled daikon and carrot on a crusty baguette ($12), then had fork wars over the always delicious chili chicken cabbage salad with its sesame oil, shallot, peanuts and mixed herbs ($12; at BT to Go it’s $9.95 for about this size).

Walk past another pass-through and you’re standing in front of Gallito Taqueria, Ty Rodriguez and Ferrell Alvarez’s taco shop, the quality of ingredients high (they are bringing in raw tortillas from Hacienda in Los Angeles and cooking them up to order), with fillings like unctuous duck carnitas and butternut squash with pepitas (tacos $4, with tostadas to be added later when they are not chickens-without-heads busy).

I have never seen this many people in the Channelside area, all different ages and backgrounds, many sprawled out on the lawn or playing cornhole. (By the way, they pressure-wash the lawn daily in case dogs make mistakes.) I watched as a huge flat-screen TV was installed against one wall and envisioned movie nights. It remains to be seen how bullish Tampa Bay will be in August when Sparkman is sweltering, but it’s easy to imagine folks getting off the cruise ships and making a beeline. Oh, and parking is not maddeningly difficult, with a big adjacent lot and the old multilevel Channelside pay lot picking up the slack.

Strategic Property Partners has put together a multilayered destination where there seems thus far to be very little redundancy. There are still things to work out, things like a cohesive “your order is ready” system, and, because each vendor has its own point-of-sale method like Square or Toast, the tipping options are vexingly different. At a couple of them, the minimum suggested tip is 18 percent — very steep for counter service. But Vinik’s idea for Tampa’s new waterfront, from the Pep Rally murals to the row of porch swings near the water, is nothing short of visionary.