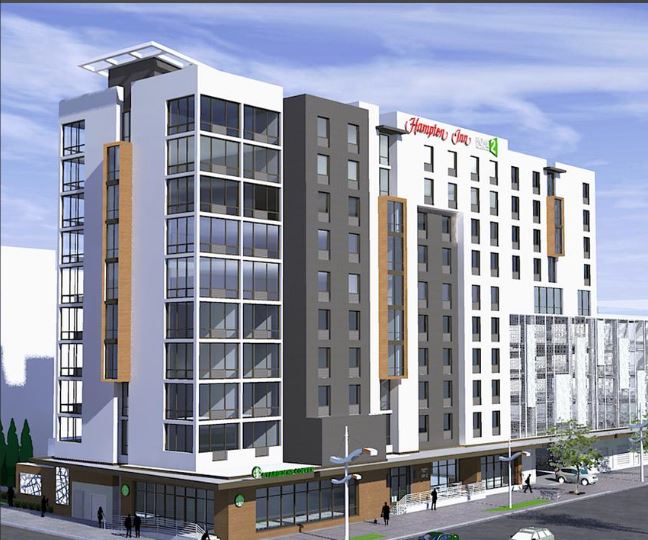 A dual-flag hotel will begin construction on a prime corner of downtown Tampa’s Channel district in early 2018.

The nine-story hotel, which will carry the Hampton Inn by Hilton, Home2 Suites by Hilton flags, will have 213 guest rooms and include a ground-floor Starbucks. It will be built on a currently vacant parcel at 1155 E. Kennedy Blvd., which is just under an acre.

Plans for the hotel first went public in December 2016.

Liberty Group, the Tampa-based developer of the project, secured a $24.3 million construction loan for the project from Centennial Bank, Hillsborough County property records show. Liberty paid $3.25 million for the vacant land in 2016.

Liberty redeveloped a former office building into the Aloft Hotel in downtown Tampa in 2014, which it has since sold off.

The new hotel follows a residential building boom in the Channel district, where thousands of multifamily units have been built in the last five years. The hotel is just two blocks from Channel Club, a 21-story apartment tower and new Publix Super Markets Inc. store, which is under construction between Madison and Twiggs streets.

The Channel district project is the “first purpose-built dual-branded hotel in West Florida,” Liberty said in a statement. The Home2 Suites by Hilton targets both business and leisure travelers, with a workstation and full kitchen.

“Our development of this new mixed-use project in the Channel District of downtown Tampa is a product of the tremendous growth the area has witnessed over the past few years,” Liberty CEO Punit Shah said in a statement.

Shah has a minority stake in the new, Derek Jeter-led ownership group of the Miami Marlins.

Wichman Construction is the general contractor on the hotel. Chancey Design Group is the architect and interior designer, and Hamilton Engineering is the civil engineer.