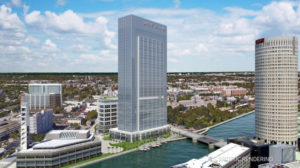 TAMPA — Convinced that the city is on a “very positive trajectory,” a Tampa-based real estate firm is planning an ambitious project that would include residences, offices, retail and hotel space on the west bank of the Hillsborough River near downtown Tampa.

If it came to fruition, the proposed Lafayette Place would represent another major step in redevelopment of the west bank area, where a $35 million makeover of the Julian B. Lane Riverfront Park is well under way.

In a news release, the Hillsborough River Realty Co. said its Lafayette Place project would include “three complementary 21st century-structures” on the south side of Kennedy Boulevard — one tower fronting the river, one building behind it and the third in the increasingly vibrant Grand Central District nearby.

The company originally planned a riverfront office tower and two parking garages. But it decided that a mixed-used project is the wave of the future, as cities from Boston to Chicago to Charleston, S.C., already have shown, said president John Avlon on Monday.

The name Lafayette Place pays homage to the historical significance of what originally was called the Lafayette Street Bridge. Completed in 1889, it was the first general traffic bridge across the Hillsborough River. Since the 1963 assassination of President John F. Kennedy Jr., it has been known as the Kennedy Boulevard Bridge.

The real estate firm has owned the land near the bridge for some 30 years, Avlon said, and took advantage of the bridge’s major renovation in the 1990s to install pilings at the site. Those will be the foundation for what he called an “exceptional” Riverwalk-like promenade on the west side of the Hillsborough River.

Two of Lafayette Place’s three buildings would be directly across Kennedy Boulevard from Plant Park — the riverfront Lafayette Tower with offices, hotel and retail uses, and the adjacent Lafayette Parkview with high-end residences, retail and parking.

The third building would be in the Grand Central District, which has been transformed by the huge popularity of the Oxford Exchange restaurant/bookstore/gift shop. That building would also have retail, parking and high-end residences — probably apartments rather than condos.

“For some reason, the condo market in Tampa is not as vibrant as elsewhere,” Avlon said “though that could change very quickly.”

Hillsborough River Realty, which owns its land free of debt, applied to the city Monday for rezoning to allow mixed-use development. Avlon would not give any figures for the project’s cost and said it was too soon to discuss financing.

Experts say the window for major private projects may be narrowing.

“It’s easy to announce a project, it’s tough to finance and construct a project,” said Robert Stern, a real estate attorney with the Tampa firm Trenam Law, on Monday.

“In this market, where there is such a long lead time from construction to obtaining a revenue stream from rents or sales, I would have to think lenders are being exceptionally cautious.”

However, if financing were available, “I think there’s demand” for a mixed-use project in the area, Stern added.

On the west side of the river just to the south of the proposed Lafayette Tower site are the studios of WFLA-TV and the building that once housed the Tampa Tribune.

Miami-based Related Group bought the Tribune property last year and announced plans for an eight-story, 400-unit apartment complex. Demolition, due to begin this past summer, has not yet started.

Related Group representatives did not return a call or email Monday.