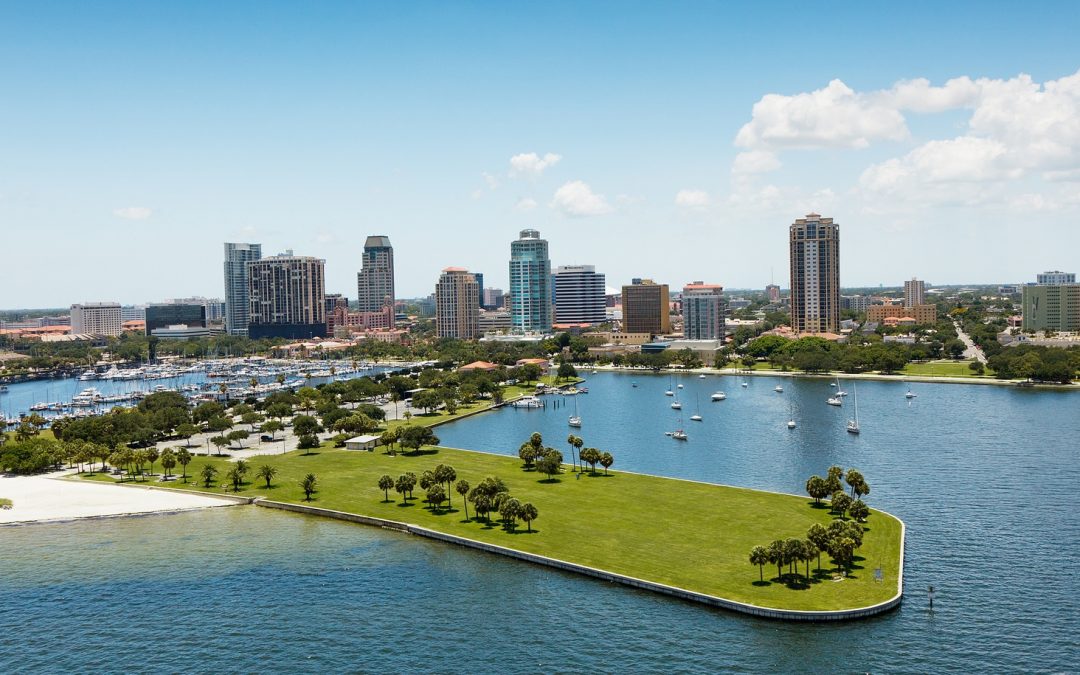 In Tampa Bay’s two largest cities, times have changed, to say the least.

St. Petersburg’s reputation as a retirement haven, the city of green benches, and downtown Tampa’s status as a ghost town after 5 p.m. appear gone for good.

Curtis Hixon Park attracts locals and tourists day and night. Today, Tampa’s downtown hums with activity at night and on weekends. On sunny Saturday afternoons, 20- and 30-somethings descend on the Tampa Riverwalk to bask in the weather and participate in the latest festival while foodies head to new food halls at Armature Works and on North Franklin.

Across the bay, St. Petersburg has transformed into a nightlife and arts hub that stretches from the waterfront miles west to the Grand Central District.

“If you walk around downtown on any night of the week, but especially a Friday or a Saturday night, you are blown away by the density,” says St. Petersburg City Development Administrator Alan DeLisle, who lives downtown. “That density goes from Beach Drive all the way down Central Avenue for blocks and blocks and blocks.”

These downtown rebirths have not happened by accident.

Local leaders say focused efforts to improve and revitalize the urban core attract a younger population to live and work there. In turn, the growing population of younger professionals helps produce the energy now coursing through the hearts of the Tampa Bay Area’s largest cities.

“We are overrun by millennials and young professionals of all ethnic strata, which is a really good problem to have,” outgoing Tampa Mayor Bob Buckhorn says. “It’s what we set out for eight years ago when we were exporting talent to Atlanta, Charlotte and Nashville.”

“It’s activated our downtown in ways it was never activated before,” Buckhorn says.

The draw for young professionals

Raechel Canipe came to Tampa to attend the University of South Florida. She liked the city during college but truly fell in love with it after graduation, when she landed a job with DEX Imaging and became active in the Greater Tampa Chamber of Commerce Emerging Leaders of Tampa Bay program.

Canipe, 27, says the live, work, play attraction of the city offers ample job opportunities, a “booming downtown” and a cost of living that makes Tampa one of the most affordable metro areas in the country, according to the 2018 Cost of Living Index.

Beyond that, there is the draw of the beaches in Pinellas County, and three major professional sports teams (the Lightning, the Rays, and the Bucs), and the sight of construction cranes that show the city’s growth spurt will not tail off anytime soon.

The St. Pete Pier under construction.Canipe says young professionals are also becoming more connected and involved with the city by joining networking organizations like Emerging Leaders of Tampa, which she chairs. Through these groups, they are rubbing elbows with government officials, getting the inside scoop from business leaders and advocating in support of issues, like the All for Transportation sales tax referendum that passed in Hillsborough County and will help determine the long-term direction of the city.

“In the groups I am involved with, I see a lot of transplants who moved here for a job opportunity and the low cost of living, and now they’re looking to grow their network,” Canipe says. “They’re looking for ways to get connected and our program offers opportunities to get involved with Tampa in a much deeper, more meaningful way. When I was in school, I was pretty sure I liked Tampa, but I’ve really fallen in love with the city seeing behind the scenes everything that is going on. We feel we are able to influence and shape our community for the future.”

Across the bay, Reuben Pressman grew up in the Bay Area, graduated from the University of South Florida in St. Petersburg with a degree in entrepreneurship, and stayed in the city to launch his career as an entrepreneur.

“Most of my friends or other founders of companies were leaving, or at least that was the current trend,” Pressman says about the trend a decade ago.  “It was easier to build a company in other cities like Silicon Valley, New York, Austin, Boston or Chicago. But I grew up here, had already built a very strong network and wanted to build my company here, where I’ve had so much opportunity. I wanted to be a part in helping grow the eco-system here. I love the place, between the arts, community, people, food, weather, opportunities to get involved, growth, events, and activities. It has everything you could want without the millions of people crowding it all. It has the feel of a smaller city.”

Today, Pressman, 29, is the founder and CEO of Presence, an education technology platform used by more than 100 higher Zukku Sushi offers rolls, sushi burritos, and poke bowls at Armature Works Heights Public Market. educational institutions to increase student engagement, graduation rates, and workforce readiness. He’s also active on the board of multiple nonprofit organizations and civic and economic development groups. He says, as much as the weather and the cost of living, many young professionals decide to stay in St. Pete or move here because of those opportunities to get involved in civic and professional groups and make a positive impact in the community.

There is also the explosion of things to do in and around downtown.

“For the young professionals moving here, I definitely think it’s culture,” Pressman says. “At the risk of sounding like a TV ad, you
can live, work and play downtown. Although it’s getting pricier for St. Petersburg and this area, it’s still nothing compared to other cities with amenities that do or don’t even match up as far as food, arts, and community engagement. There’s also the quality of people, with loyalty and love for this place, unlike many other places you could go. From new restaurants opening weekly, a brewery in shouting distance from anywhere, hundreds of outdoors parks, especially for dogs, and venues, an engaged city government and endless open jobs and opportunities at amazing companies doing meaningful things for ranges of talent, it’s easy to see why young pros are moving here.”

In some ways, the data belies the notion that Tampa and St. Pete are growing younger – at least from a citywide perspective. The median age of St. Petersburg and Tampa have both increased moderately since the 2010 Census, according to U.S. Census Bureau numbers. In St. Pete, it is 44.6. In Tampa, the median age rose from 34.5 to 35.6, which is still below the statewide average of 41.8.

But numbers for key demographic groups show that there’s more than anecdotal evidence that the cities are growing and that their urban cores are indeed growing younger.

Main dining and bar area of the new Blind Tiger in South Tampa/Hyde Park.Research by the Tampa Hillsborough Economic Development Corporation shows the total population of the Tampa-St. Petersburg-Clearwater metropolitan service area rose by 7.7 percent from 2014 to 2018, with a significant 12.3 percent increase in the key 25-34 age group.

For St. Petersburg, the long-term trends show a younger, more educated population with rising income. The city’s annual State of the Economy report shows that, while the city’s median age remained above the national average, it had declined by 3.3 years since 1970, while the national median age had increased by nearly 10 years.

More recently, the city’s population grew by 3.7 percent from 2014 through 2017, accounting for nearly 37 percent of the population growth in Pinellas County, and the median household income grew by 19.7 percent, city numbers show.

He says an uptick in population growth for the 30-45 age range is due to the fact that “the jobs we’re attracting now pay more and you have to have a little bit more experience.”

At the same time, the percentage of St. Pete’s population in the 20-39 age range most associated with labor pool availability trends down from 28.6 to 26.9 percent from 2016 to 2017, a sign the city still needs to recruit and retain more young talent.

As for the impact on local government operations, officials on both sides of the bay say a younger population in the urban core affects transportation, particularly improving bicycle and pedestrian facilities and public transit to meet the needs of a younger population.

In St. Pete, that includes the addition of bike share, the new looper system downtown, working toward bus rapid transit on the Cyclists on the Riverwalk in Tampa.
Central Avenue corridor and changing the bus system to add more drop-off points at employment centers.

Affordable housing is another issue.

A recent report conducted by RCLCO real estate advisors, The New Geography of Tampa Bay’s Urban and Suburban Neighborhoods, shows that, while urban areas are younger than the suburbs and growing younger, wages are higher in the suburbs, while the cost-of-living is more expensive in urban areas.

DeLisle says a partial solution is a condition on all requests to redevelop city properties, such as the old police station, that any residential construction must include housing for a variety of income ranges, including market, affordable, and workforce housing.

Looking ahead, the Tampa Hillsborough EDC projects the region’s population will grow 6.3 percent from 2019-2023. The population in the 25-34 age range is expected to increase by a more moderate 4.4 percent, while the 35-44 group is projected to rise by 9 percent.

Of course, the deep dive into the area’s demographics will come next year with the 2020 Census. The U.S. Census Bureau will have 15 field offices across the state to serve as management centers for home-based census takers and supervisors, and provide working and meeting space for managers and support staff, a spokesman says.

The St. Pete and Tampa offices are slated to open in July.